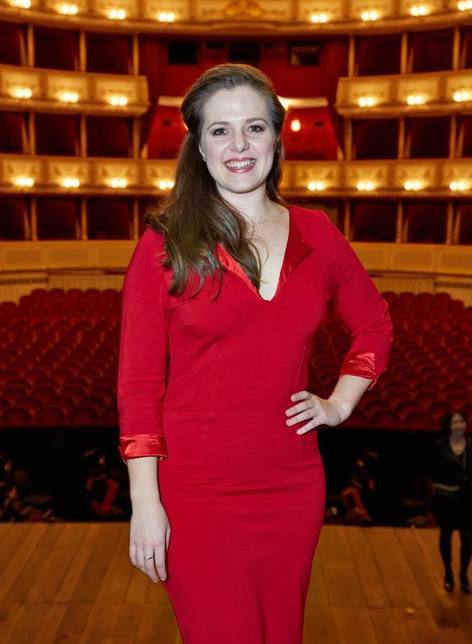 Tasmanian Soprano, Bryony Dwyer, is a current member of the Ensemble of the Wiener Staatsoper. In the 2019/2020 season Bryony has been heard as Pamina (Mozart: Die Zauberflöte), Musetta (Puccini: La Bohéme), the Title Role in the World Premiere of Albin Fries’ opera Persinette, Giannetta (Donizetti: L’elisir d’amore), Barbarina (Mozart: Le nozze di Figaro) and as a part of a Beethoven Lieder Cycle Progamme for the celebrations of the 250th birthday of the composer.

In previous years at the Wiener Staatsoper Bryony has performed, among others, such roles as Elvira (Rossini: L’Italiana in Algeri), Sandmännchen und Taumännchen (Humperdinck: Hänsel und Gretel), Mlle Jouvenot (Cilea: Adriana Lecouvreur) and as Cinderella in the Premiere of the Wiener Fassung of the Kinder Oper by Alma Deutscher.

For the 2018/2019 Season, Bryony was engaged at Stadttheater Klagenfurt, where she had much success with her role debut of Musetta (Puccini: La Bohéme) under the musical direction of Lorenzo Viotti. During her time in Klagenfurt, Bryony also appeared as Servilia (Mozart: La clemenza di Tito), Erste Elfe (Dvorák: Rusalka) and Jasmin in the opera Koma by Austrian composer Georg Haas. Appearing a second time as Jasmin, Bryony made her debut at Opera de Dijon in June 2019.

Other guest appearances include Oper Wuppertal, where Bryony made her role debut as Micaëla (Bizet: Carmen) in 2018. Bryony has also appeared at Oper Köln in the role of Ännchen (Weber: Der Freischütz) and as Barbarina (Mozart: Le nozze di Figaro) on two separate occasions as a member of the Wiener Staatsoper Ensemble at the Royal Opera House of Muscat, Oman and at the Festival of Aix-en-Provence. In the summer of 2016 Bryony appeared as the soprano soloist with the La Cetra Barockorchester under the baton of Andrea Marcon at the Holland Festival in Melancholia, a co-production of early music, dance and movement between Theater Basel and Junges Theater Basel.

In the seasons during 2015-2017 Bryony was a member of the ensemble at Theater Basel where she was heard in many roles, including Erste Dame (Mozart: Die Zauberflöte), Julia (Blacher: Romeo und Julia), Mélisande (Dukas: Ariane et Barbe-Bleue), Julie Jordan (Hammerstein: Carousel) and Susanna (Mussorgski: Chowantschtschina). At the start of the 2017 season Bryony returned to Theater Basel as a guest to reprise her role of Morgana (Handel: Alcina) in Lydia Steier’s acclaimed production, once again under the musical direction of Andrea Marcon with La Cetra Barockorchester.

For 10 years Bryony was  a member of the Royal Australian Navy - Reserves performing with the Royal Australian Navy Band, travelling all across Australia and overseas performing for national and international dignitaries. Highlights include performing for King George Tupou V of Tonga at his coronation and singing the Australian National Anthem at the Dawn Service and the Lone Pine Service in Gallipoli, Turkey, on ANZAC Day, 2010. Additionally, for ANZAC Day in 2012, Bryony travelled to the Western Front in France to sing for the Dawn Service at Villers-Bretonneaux.

Bryony is a graduate of the University of Sydney’s Conservatorium of Music, having studied with Barry Ryan OAM, completing a Bachelor of Music in Performance in 2008 and an Advanced Opera Diploma in 2011. During this time of study Bryony appeared with the Sydney Chamber Opera in the roles of Governess (Britten: The Turn of the Screw) and Fox (Janáček: The Cunning Little Vixen).
In her home of Tasmania, Bryony has performed with the Tasmanian Chamber Orchestra as Belinda in Purcell’s Dido and Aeneas.
At the completion of her studies, Bryony went directly to the Wiener Staatsoper as the 20th recipient of Opera Foundation Australia’s Vienna State Opera Award (2012), where she has been a member of the Ensemble since the 2013/2014 Season.

(c) Biography not to be reproduced without authorised permission from bryonydwyer.com
All details correct and current at January 2020.